Yesterday I went for a walk across the dam within driving distance of where I live.  Something about that mountain is so majestic.  It was a beautiful day and I just enjoyed the beautiful view and the fresh air so much.  There is an airport right near that area and I like to see the small planes that land and take off as well.  There is a farm-stand on the way there that I stopped and got some fresh veggies.  They will only be open for a couple of more days because of frost at night now.

The maple trees are really at their peak in this area now.  My favorites are the group of huge red maples along route 5.  This route also goes along the Connecticut River which is really pretty.

I love this time of year.  My cell phone, which is a Moto-X and couple of years old takes really nice photos.   I just love it.

Because one of my grandmothers was pure English, I love anything Victorian.  When I turned on the TV this morning, there was a program on called All Things Victorian and they made Balmoral Shortbread.  I loved how they showed how to make them the old fashioned way, the way my other Gram that was pure Irish made them.

She has lavender scones on the left side of her that just came out of the oven.  She is showing how she used a fluted cookie cutter and just rolled out a little dough at a time, not rolling back and forth, but from the middle out like her Gram did and cutting one cookie at a time.  Then she showed how she used a fork to prick the dough using the old fashioned domino effect which is how the English did it, by going 3 across and 3 down.

The lavender scones were awesome and would be perfect to have with tea.  She said that it’s best to either use lavendar that you grow in your own back yard or organic lavender. 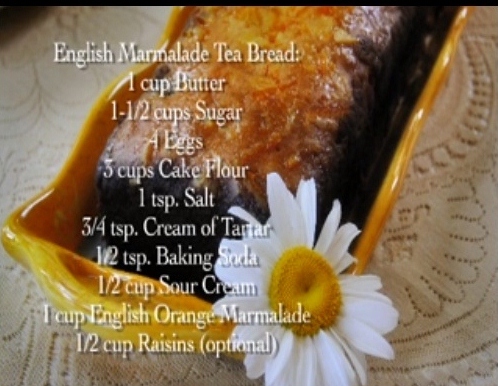 Then she made English Marmalade  Tea Bread that had a marmalade glaze over the top that had a half of cup of rum in the glaze.   It made two loaves of bread and looked really good. 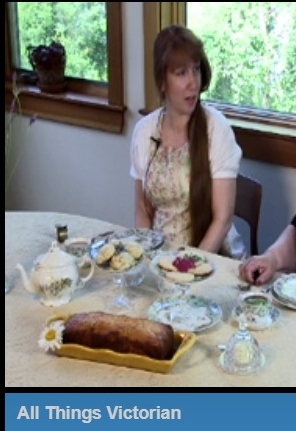 I liked the apron that she wore as my Mom always wore aprons like that as well as both of my Grams.  She has a blog called victorian lady lisa that has all the recipes.  I pinned all the recipes on my tea ideas on my Pinterest.  She fillmed the episode I saw this morning at a friends house that had a Victorian kitchen.  And then she had tea with that lady at the end of the show.  She said that Queen Victoria had those Balmoral Shortbread cookies every day.  They sound like they must be good.

It’s a really neat blog that I found after watching that show on TV.  I read that she is going to do a video soon on afternoon tea that will be filmed at a country Inn.  Hope to catch it when it comes on as I love stuff like that.

She had another episode that shows Victorian fashion and she said that she had a lady that donated several boxes of Victorian clothes and some Victorian baby clothes.

The above is a photo of my Mom when she was a baby.  I love the little Victorian style dress that she has on.  My Gram saved all of my Mom’s baby clothes and gave them to my Mom when my sister was born.   I came along 8 years later and those clothes were long gone.   Oh well.  My cousin had the photo and I got a copy of it from photos that my Gram had.  It was a very old photo and scratched, but I copied it the best I could.  So precious to me.  It used to be the style in the 1920’s to be a cupie doll style with a big curl on top of the head.

I loved starting off my Monday with the nostalgic Victorian baking show on early this morning.

I would love to bake all three of those recipes and have my sister, a couple of friends and my daughter in law for tea.  It would be really neat if I had an outdoor garden space.