It’s been in the 20’s here lately and there has been frost on the pumpkins for sure. 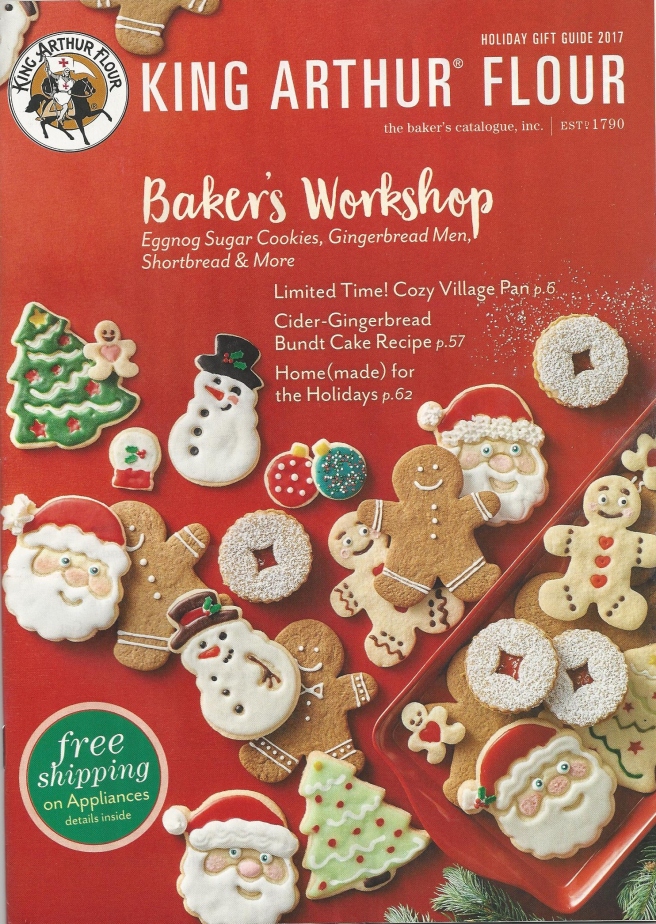 I got a new King Arthur Flour catalog today.  I read it from cover to cover a couple of times and would order everything in that catalog if I could.   I love the ideas that they have and they have awesome recipes as well here and there in the catalog.  I like the cookie cutters that they have for the cookies on the cover of the catalog. 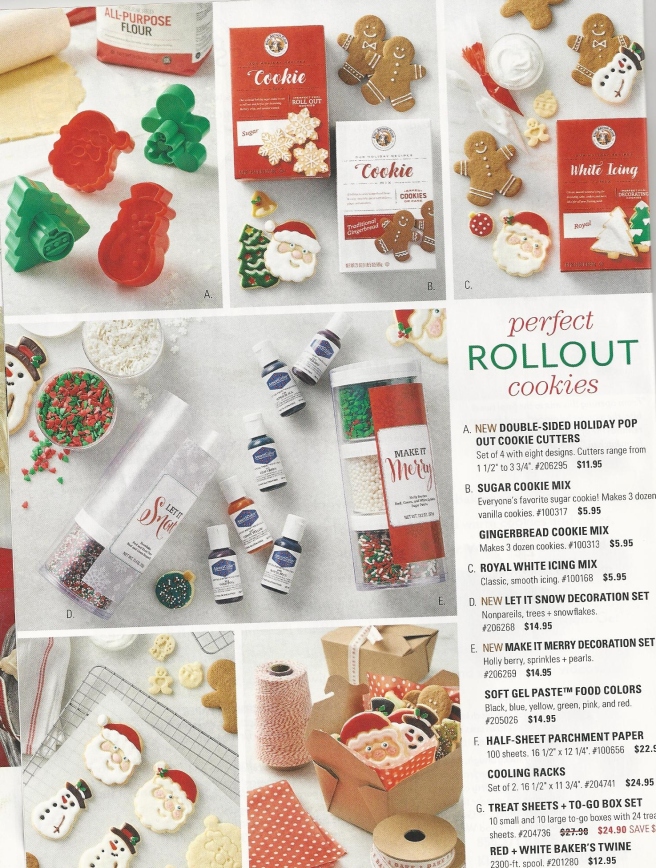 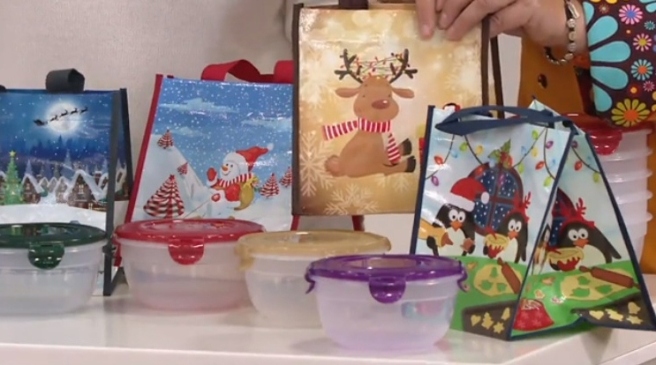 The King Arthur Flour catalog had all kinds of gift ideas.   I liked the “Winter Warmer Gift Box” .  It had hot cocoa mix, Peppermint Crunch and Gingerbread Cake and Cookie Mix.  I also liked the “Divine Doughnut Gift” that had all kinds of doughnut mixes as well as that doughnut pan that you can bake doughnuts in.   And I love the jute bag it comes with.

I also got a Vermont Country Store catalog that I read from cover to cover several times.   So many cute ideas in it.

I love Vermont Country store’s candies.   They have all kinds of old-fashioned candies.

I love those Boston Fruit Slices in the Nutcracker tin.   So cute.

The warm socks that the Vermont Country Store has are really a nice gift for the Vermont weather in the winter.

I like the toys that the Vermont Country store has.   When my brother was a toddler, he carried a Raggedy Andy around. 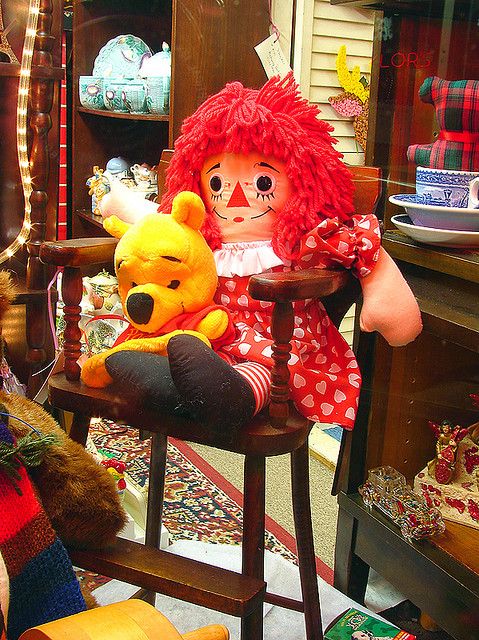 I saw a Bed and Breakfast one time that had a cute Raggedy Ann in a baby high chair.   It looked so cute.

I love dinnerware and the Pfalzgraff dinnerware is awesome.  Their Plymouth style is so cute for Thanksgiving.

All their dinnerware is on sale plus they have a 20% off code and free shipping over $49.00.  I like the above vegetable dish.  It would be a nice addition to the Thanksgiving table each year.

I have a dragonfly rubber stamp that I decorate my planner with.  I bought all kinds of fun stuff for my planner at Michaels Craft last week and with 40% off coupons, I saved quite a bit. 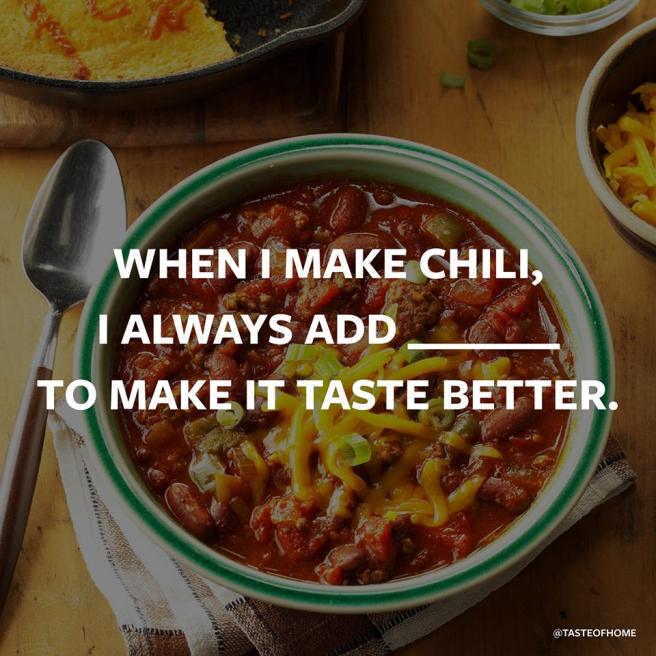 It’s definitely Chili weather.  The above came into my facebook and there were about 300 comments of what people added to Chili.   Some of the additions that I thought were interesting were hot sauce and fire roasted tomatoes, bit of chocolate, half can of beans in a blender for thickener, worcestershire sauce, Apple Cider Vinegar, Ground Mustard, a little Brown Sugar, Jar of hot Salsa, Smokey Bourbon, couple squares of 70% cocoa, Red Wine, Fritos on bottom and cheese on top, A-1 Sauce, Bacon Bits, a little V8, Bloody Mary Mix, Chipolte Peppers in Adobo sauce and Louisiana Hot Sauce.  I definitely are going to try some of them the next time I make Chili.

I like Martha Stewart style.  She has a community of houses that she designed and partnered with some builders.  There are some in Colorado, North Carolina and the newest ones are in Florida near Orlando.

The house that Martha has in Maine is called Skyland.  That house was once owned by Henry Ford’s son.  Martha’s daughter gave her the above car which is an antique to go with that house.  She is one of three women in the USA that is a billionaire.  I think that it helped that she married a Yale graduate that got her interested in stocks and Wallstreet and probably showed her the ropes and started her road to wealth.  But most of her money came from stocks in her own companies from what I understand from an interview of hers that I saw.

There is a place in northern Vermont where two ladies that worked as chefs both lost their jobs because of the economy.  They didn’t want to go to the poor house so they started a business called “Poor House Pies”.   And can they ever bake.  On holidays they make doughnuts on the Sunday before the holiday.  Their pies are sold at their house in a little farmstand that is on the honor system to pay for the pies.  So cool.  From the jobs that they had, I don’t think they have to worry about money.  One of the ladies taught at a culinary school and they probably were old enough to retire. 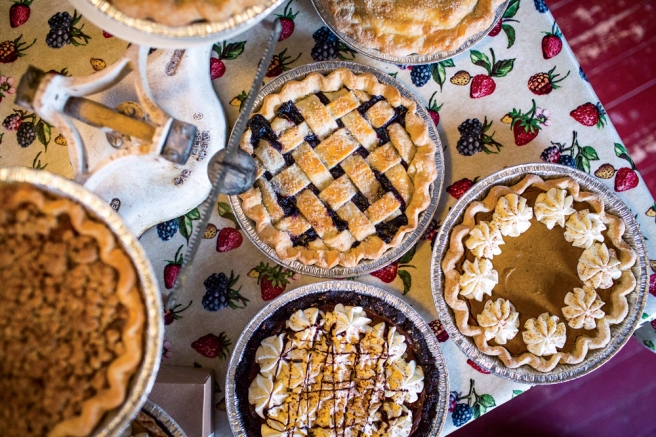 The above are some of the pies that they make.  They put them in a fancy box and tie the box with string.

Well, it’s getting late and I have to call it a day.  Thanks for visiting my blog.